Mention Jewish evangelism and France is not likely to come to mind. Unless, that is, you know something of Jacques Guggenheim, CJFM missionary in Paris.

His heart burdened for the 700,000 Jewish persons who live in his country, Guggenheim and his wife, Reine, work as missionaries to the Jews there. At the age of 28, he promised God his life if He would rescue him; he has spent the last 36 years fulfilling that promise.

The core of his work is a bimonthly paper he publishes called Le Berger d'Israel, which means "The Shepherd of Israel." Between 10,000 and 15,000 are initially printed, but heavy requests for extra copies sometimes require as many as 40,000. They are mailed not only to readers in France, but also to persons in Switzerland, Belgium, Israel, Great Britain, Canada, the US, Australia, China, and several eastern European countries.

Much of Guggenheim's time is consumed in writing material for Le Berger, obtaining articles from other authors, designing and pasting up the paper, overseeing its printing, and then mailing it. However, he also spends 10 to 15 days each month on the road, lecturing at churches and Bible colleges in France, Holland, Switzerland, and Belgium.

"There is a great interest," he says, "but also ignorance, some misunderstandings, and sometimes serious mistakes. We need to have a real and right understanding of who the Jewish people are today if we want to proclaim the Good News."

Wherever Guggenheim goes, he distributes copies of Le Berger—using it mainly as an evangelistic tract, but also as a tool to educate Christians about Jewish sensitivities. "We emphasize the difference between the so-called 'Christian' civilization in which we are living, and the Church—that is, the Body of men and women who have individually accepted Jesus in their lives as Savior and Lord."

Christians organize for Guggenheim private meetings with their Jewish friends so he can witness one-on-one, or speak to small groups during his travels.

As an offshoot of his ministry, Berger d'Israel Bible groups meet regularly in Paris, Lyons, Marseilles, and Aix. Attending these meetings are Jewish persons who are interested in the Word of God, and Christians who support the work in prayer.

The group in Paris meets every third Friday evening and Saturday afternoon. The Friday-night session is usually open and lively, with debates such as "Why the Law?" or "What Is the Meaning of Savior, Messiah, and Lord?"

The Saturday meetings are more like lectures, with such topics as "How the Torah Leads Us to Messiah," or "Studying Psalm 110." Between 10 to 30 people attend the meetings. Occasionally Berger d'Israel Bible groups meet in other cities.

Recently, Guggenheim has spoken on Christian radio stations in the greater Paris area regarding messianic Jews, and has received an outpouring of letters and requests for the paper in response to the broadcasts.

"There is real work to do," he says, "welcoming and listening to people with big problems in their lives. We tell them that the Lord is the One who brings an answer to their difficulties."

Because he has contacts with so many messianic Jews, he sees a real need for the different groups to respect and love each other, despite differences in viewpoint.

"Our Master is not to be found in Geneva or Jerusalem; neither in Rome, nor in the States, nor in France. He reigns at the right side of God, and we must seek for His will and gladly obey Him.

"We must be united in order to proclaim the Gospel, and be waiting for the glorious return of the Messiah. Every minute leads us nearer to that return day!" 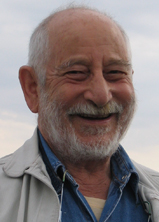