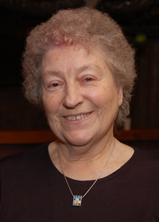 Greetings again from the Land of Israel. As I start to write this, it is the second day of spring, the fields and hills have been covered with beautiful amenomies of various hues, but winter and spring are still battling for hegemony. 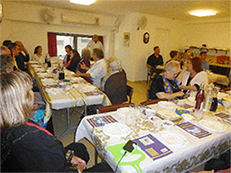 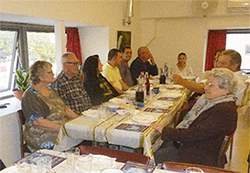 The festival of Purim which celebrates the deliverance or the Jews in Babylon from the hand of Haman, who planned our destruction about 2500 years ago, is behind us. Also behind us is Passover, in which we celebrate our deliverance from Egyptian slavery through the blood of the slain Lamb (almost 3400 years back) – and of course, we also remember the Lamb who was slain for us on Calvary. We had around 35 for the Passover service, with about 9-10 Arabs also attending, including Lebanese. We also celebrated the Resurrection, which of course occurred during the Passover! We trust that you too had blessed Resurrection or Passover services.

This season has been very busy with visitors from as far away as Germany, Scotland, Spain, Norway, America, Bolivia, and England, as well as Israel. One is staying for 5 months, and a honeymoon couple plans to stay with us for 2-3 months. Our beds rarely get cold here!

A few weeks ago, I had a visit from my favorite Moslem plumber again, the one who went to a Christian school in Hebron many years ago, and who has never forgotten what he learned there. Apparently, he has had problems with his children (two of whom have finished medical school in Romania, and two who are still learning at the University in Israel). Each feels that their father has done more for the others! I was able to relate some of the terrible things my children said to me and about me, and how different they are today, and how they really show their love and gratitude now! He appreciated this and replied, "I have loved you since my first visit. You always comfort me!" Pray that this Moslem may know the God of all comfort about whom he has heard for many years.

The next day I went with a friend to a kosher restaurant, where the young Jewish manager, Ronnie,* has accepted two books about the Faith. He came over to greet my friend and me, and when we left, I went to say goodbye to him. He hugged me and said, "I love you, Ruth." Pray that Ronnie may find his peace. His mother died of cancer, and I think he regards me as a surrogate mother. Regardless, the Lord is opening doors. I was also able to see Lila* on the Kibbutz; she is always delighted to have us for lunch and afternoon coffee, but has not yet opened up to the Gospel! Lila is a good friend of Shoshana, from whom I no longer hear. I fear she is too weak now after many falls and her approaching 94th birthday. Please pray for her too. Her daughter recently updated me, and said she is much weaker, and they are moving her to a place where she will be constantly watched and looked after! We would appreciate prayer that more people will become interested in the Gospel, both Moslems and Jews. *Not their real names.

I am pressing on with this, and am at last making some progress. I am reading children's stories in simple classical Arabic, and finished the story of Esther just in time for the Purim Festival. I have also learned the Lord's Prayer. I have at least nine more storybooks to work through and also want to look at Isaiah 53, ha, ha!  Well, I can always look at it and try. Ok, but it is a challenge!

We want to thank all who have contributed to the Refugee fund and the Christian Soldiers' Home, as well as to the fund for poor Jews and Arabs. With these funds, we can help many people and spread the Gospel. The giving for the refugees and soldiers cheered us greatly. Here is a picture of the Soldiers’ Home adjacent to Najeeb's congregation, with the flag flying to celebrate Independence Day (69 years). Thank you all so much. 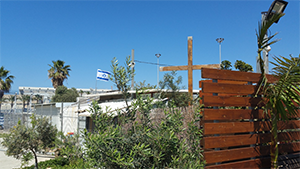 THE FLAG FLYING OVER THE SOLDIERS’ COMPOUND (HIDDEN FROM VIEW)

There are also many Syrians being treated right here in Nahariya for their sicknesses or wounds received from the infighting in Syria. Our pastor would like to visit them with a local Arabic speaker if we can get permission. Pray also for this endeavor.

Also, this last month, our meeting hall has filled up again, and we have been encouraged. Thanks for praying for us. We have not only had a full hall, but last Saturday we also had a wedding blessing ceremony for a young couple whose wedding will be in Cyprus this coming Friday. 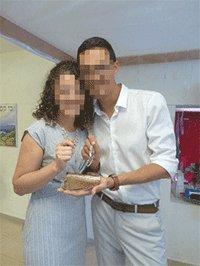 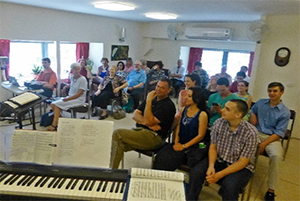 *Not their real names

It is still very volatile, with some politicians predicting another Gaza war in the summer. Pray for Israel, especially for believing families, as Najeeb's son, Tino, and my grandson El Chai, may both be involved! Isis continues its threat to destroy us, as do Hezbollah and Iran, where there are now millions of believers. We all need your prayers.

With our greetings and blessings,