Jenya Drazman was born and raised in the family of a Jewish sea captain on Russia’s Pacific coast. Their home was secular, although Jenya was aware of her family’s heritage.

At age 17, Jenya’s family moved to her father’s home city of Dnepropetrovsk in Ukraine where she studied linguistics at a local university. Two years later, she met a group of missionaries from Canada on campus. At first, Jenya didn’t know they were believers. She was simply intrigued by the fact that they were from a different country. Jenya attended several lectures given by one of the Canadian professors. It was then that she heard, for the first time, that Yeshua (Jesus) died on the cross for her sins and that He was the promised Messiah. She rejected the news and presented her views instead. What Jenya did not know then is that God was already preparing her heart. A short time later, Jenya invited Yeshua to come into her heart as her Lord and Savior—right in the middle of a university classroom!

Around the same time, Jenya’s dad came home from an expedition in South Korea. Unpacking his suitcase, he handed Jenya a Bible which had been given to him by a missionary and said, “Here, you study literature. Want to read it?” It contained both the Old and New Testament. He had no idea that his daughter had become a believer in Jesus, and that he had given Jenya her first Bible—not a literature book!

Following her graduation, Jenya moved to Canada, where she earned a degree from Providence Theological Seminary, with a major in Christian education and Teaching English to Speakers of Other Languages (TESOL). She now lives in Toronto with her husband, Victor, and their two children. Because of her fluency in languages, Jenya is able to reach out to the Russian-speaking Jewish community. By interpreting for them when needed, teaching them English, and befriending them, Jenya notes that God provides opportunities to share the Good News.

God has given Jenya a burden for the unsaved and a talent which enables her to cross through language barriers to reach “the lost sheep of the house of Israel” with the Gospel message. Jenya serves as a representative with CJF Ministries in Toronto. 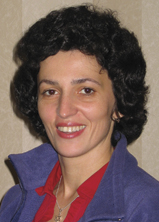