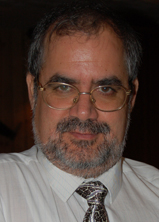 I was born in 1960 in Haifa, Israel to a traditional Jewish religious family (Masoraty). My father worked in the Rabbinate (the state's official Jewish religion authority), as a circumciser (Mohel), a cantor and a Bar Mitzvah teacher, etc.

In 1983, after nine months of searching and being exposed to the messianic belief, I came to faith and joined the local congregation in Haifa. The way begins.

After I came to know the Lord, I continued living at my parent’s house—even though my father stopped talking to me when he understood in whom I believe. I taught the children and youth in the congregation and at some national events. In conjunction with my congregational involvement, I went to a practical-engineering college. I was also involved in the Messianic Students Organization in Israel (I was the chairman in 1985 and 1986).

Being called to Karmiel:

Toward the end of my studies I understood that God was calling me live in Karmiel—a development town in the Galilee. A year and a half went by before the right door was opened for me. During that time I regularly accompanied one of the congregation's elders in Haifa to a weekly house study group in Karmiel. At the end of 1988 I moved to Karmiel.

In August 1990 I married Ronit, who is also a messianic Jew born in Israel. By the relationship with Ronit, God softened my father’s heart, and we started talking with each other again. My father was our cantor (chazan) at the wedding, and passed away three days later. We have since had three boys: Emanuel, Yedidya, and Aminadav.

Establishment of 'The-Way' congregation in Karmiel:

On Passover 1989 we had the Lord's supper for the first time; and the congregation was established. In the beginning our group was only about 10 people and we gathered in my rented apartment. We continued to gather there after my marriage and later in our new apartment—altogether for about 10 years, until the place was too small to contain all of us.

The decision to go into full-time service for the Lord:

Throughout the years, parallel to shepherding the congregation, I held a government job. As the years went by, both activities expanded. The congregation  grew from 10 to more than 70, and my responsibilities at work expanded from a simple inspector to being in charge of all Karmiel's government development works. After a long time of prayer and searching of the Lord's will, I understood that He was guiding me to quit my secular governmental job, and make myself fully available to the Lord's service. I quit the work of physically building Karmiel, to be freed to do the work of spiritually building Karmiel!

So, on August 2003 I started to work full time for God's work in Karmiel.

People come to our services not just from Karmiel, but also from the entire Galilee region, and Katzerin on the Golan Heights.

The congregation is composed of native Israelis, old immigrants, and new immigrants. All together, we have members from about 15 different countries. Our weekly service is in Hebrew, with English and Russian translations through earphones. We have a children’s class during the service for approximatley 40 children.

Our congregation is an Israeli messianic congregation—with our main aim being the Hebrew speakers in the Galilee region and all others willing to learn the language and desiring to integrate into the Israeli culture.

In 2005, we moved to our new location—a meeting hall that seats 165 people comfortably; classrooms for the children, babies, and youth; a kitchen, and offices. After the summer of 2006, the second Lebanon war (where Karmiel was the target of many rockets), and some changes in our congregation's leadership, our congregation started to grow quite a bit. We had over 125 people representing over 50 households by the summer of 2007—with new people coming every week.