Lydia Wechsler was born in Leningrad (now St. Petersburg) Russia during a time when religion was greatly frowned upon as being for "illiterate fools." Because she was raised in an atheistic philosophy, Lydia did not learn very much about her Jewish heritage.

However, after completing high school, Lydia became curious about her Jewish background. While attending a Communist Union Youth function, she met a believer in Jesus who challenged her to think about the God of the Bible. Eventually, Lydia met some American students who invited her to attend church with them. At one of their Wednesday evening Bible studies, Lydia received the Messiah as her Lord and Savior.

Miraculously, a door opened for Lydia to come to the United States in 1990. Through the providence of God, she became involved with evangelistic efforts in New York City in bringing the Gospel message to Russian Jewish immigrants. During her ministry in New York, Lydia met her husband, Michael, on a short-term missions trip. They were married in 1993.

In 1994, Lydia and her husband moved to Chicago, where she attended Moody Bible Institute for three years, majoring in Bible Theology. Michael is a Professor of Hebrew and Old Testament Studies at Moody Bible Institute. They have two children: Avriel, their son, and Elizabeth.

Lydia’s ministerial responsibilities with CJF Ministries include working under the direction of fellow missionary Mike Campo in an evangelistic outreach to the Russian Jewish community (now consisting of 45,000 Russian immigrants) and assisting him in a monthly fellowship. In addition, Lydia seeks to share her testimony in churches and with women’s groups (emphasizing the need to bring the Gospel to God’s Covenant people—the Jewish people). Being fluent in both Russian and English, she co-leads several women’s Bible studies, establishes new ones and assists in discipling new Jewish and Gentile believers.

Because of her background and training, Lydia is able to minister in diverse ways. She is also a gifted singer, having performed with a professional women’s choir in Russia, as well as with the women’s choir at Moody Bible Institute.

Lydia’s dynamic ministry would certainly be a blessing and encouragement to your church family as she shares her powerful testimony on how God has been working through her to reach the lost, and ministers to your congregation in song. 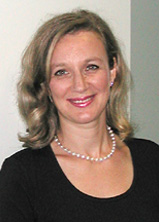