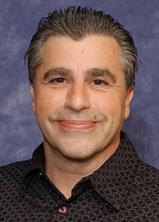 "Teaching the Bible, One Story at a Time."

This is the goal of Rob Styler, founder of 2nd Adam Performing Arts, the drama ministry of CJF Ministries.

Rob is a graduate of Moody Bible Institute (Chicago), where he majored in Jewish and Modern Israel Studies. He was ordained by Associated Gospel Churches and served as a street evangelist and pastor in both New York City and Toronto. His current position is CJFM Director of Missions.

As leader of a diverse messianic congregation, Rob was prompted to investigate different teaching methods:

“It was while I was doing this that I made an important discovery: Jesus taught mainly through stories. The stories of Jesus spoke to his friends and his enemies alike, to those who believed and those who did not, to the rich and poor, young and old—in other words, everyone. This was the answer I was looking for.”

Having always been an actor of sorts, Rob attended the Storyteller’s School and studied drama at the University of Toronto while ministering there. Rob then moved back to his home state of New Jersey and continued taking acting classes at HB Studio in New York City.

To be biblically and historically accurate, Rob thoroughly researches his characters. His desire is “to help my audience relate to and better understand the Holy Scriptures—and their Author.” The motto of 2nd Adam is “Teaching the Bible, One Story at a Time.”

In 1999, CJFM welcomed 2nd Adam into its family. In 2005, Rob was appointed director of missions. He is privileged to oversee and encourage the US missionaries, share the Gospel in unique drama presentations via 2nd Adam, and participate in the other evangelistic and training ministries of CJFM.