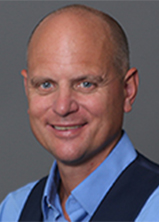 Eric Chabot was raised in a mainline denomination in Columbus, Ohio, but he doesn’t really remember hearing too many teachings from Scripture—and definitely not any salvation messages. Although not Jewish himself, Eric grew up in a Jewish community, where most of his friends were Jewish. He attended countless Jewish holiday events, weddings, and numerous Bar and Bat Mitzvahs. His daily exposure to Jewish culture continued throughout his youth and into his college years.

At age 24, Eric had never before met Jewish people who believed in Yeshua (Jesus). Invited by a friend to attend Beth Messiah, a messianic congregation led by a Jewish pastor, Eric heard the powerful and convicting message of salvation, for the first time, taught from the Book of Matthew.

After becoming a believer a few weeks later, Eric felt a strong burden from God to share his faith in Yeshua with his Jewish friends. Through Beth Messiah Congregation, Eric grew spiritually and looked for opportunities to serve the Lord. He began to understand how God had strategically placed him around so many Jewish people, and he could see that God had a calling on his life. Eric also understood that he was fulfilling what Paul wrote in Romans 11:11 about the role of the Gentiles: “. . . to provoke them to jealousy, salvation has come to the Gentiles."

Eric holds an M.A. in Religious Studies from Southern Evangelical Seminary. Serving full-time as Midwest Ministry Representative for CJF Ministries, Eric uses his gift of evangelism to reach out to Jewish people in a variety of ways and venues. He speaks in local churches and conferences about the Jewish roots of the historic Christian faith (and other relevant topics) and also serves as director of Ratio Christi apologetics chapter on the campus of Ohio State University. A collection of come of his apologetics teachings is available on his YouTube channel.